On February 15th we faced the famous clan DW in the BWTFCL. We were already short on members this evening, and it came even worse. Not enough, that we had to play without Nimrod, Jo3M, Turrican and Rahvin (*hugg hugg* Hope u´ll be back from hospital soon…), we lost Iceman, OhGott and TheEvilEls from a network-crash in their house … We tried to reschedule the match, but couldn’t find a date both clans agreed with. DW (is it standing for DefWin ??) told us a few times to give them a defwin, but of course we disagreed. If we didn’t remember them, they would have FORGOT the match .. meaning a defwin for US ….

So only Riipa, WaReZ, Spaceman, SirElliot, Dread, JokeR and Gandhi were able to fight, since DW rejected our request to use a „h0m0“ ringer. Ok, the rules were at their side, but it was quite llame imho …

The game started on a UKTFCL-Server, were our inner Defense SirElliot and Riipa had pings 200+. We decided to play anyway, and to use our server the second halftime. Also we decided to use a setup with five defense, since we didn’t trust our laggy inner defense. DW played with eight guys and did heluva job by runnin‘ right through our def with pyros and snipas and cappin‘ seven times. A „little“ bit angry ‚bout that farce I started to moan about the „heroes“ from DW .. and yes, I told them they suck. And yes, I mean it! So a little „discussion“ came up, and it looks like DW knows better how to insult players and their mothers than we do. 😛

Second halftime on our server, where all but one DW had quite nice pings. Only Biggz had a real nasty ping of 350. We played monkey_l and again we played with five defense after the 0:70 and as you might´ve thought we played with seven NVA against 8 DW again. Long time DW had a hard job to come and see our flag .. not to speak from taking it .. 😛 But later we broke and they capped our flag four times – of course not without celebrating their great victory again and of course not without telling us that we are arseholes. 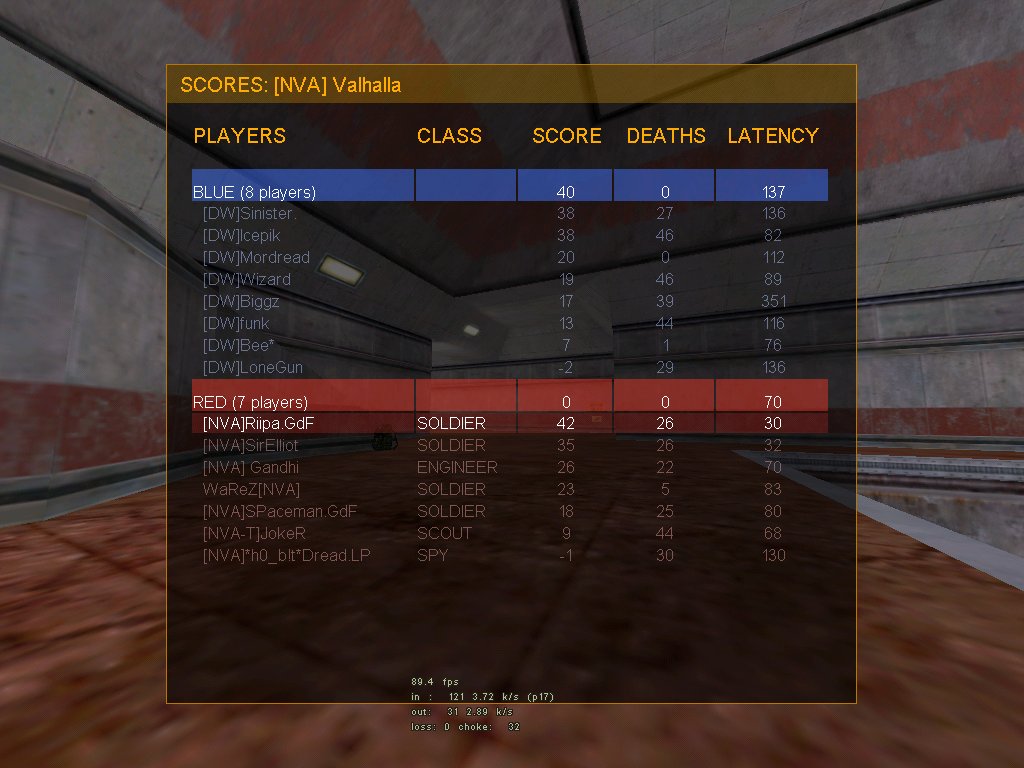 We were really looking forward to this match, we had respect. But gals and guys, here comes the truth ‚bout DW: There is no reason for respecting these guys. Respect is earned for attitude .. not for skill. For sure these guys have some skill, but they have not a single litte spark of honor or pride in their bodys. If me must face DW again in a league, we will play the game .. and maybe this will be time for giving them back their own coins!

– /me, „this riipa-idiot with a mum sucking cocks“